Groundwork Labs is an innovative program housed in one of Durham’s repurposed former American Tobacco warehouses.  Every quarter it accepts six fledgling enterprises for a three-month funded residency.  They are provided workspace and active mentoring.  It’s a running start for 24 North Carolina-based new ventures each year.  Among the mentors are experts (“gurus”) from relevant disciplines.  I am their branding guru.  With the arrival of each new set of budding entrepreneurs, I begin the process with a branding PowerPoint.  Following some introductory slides I say something on the order of “when thinking about branding, I think about this” flashing the image of a razor.  “Not this razor”, I say as the image morphs into a rendering of a Medieval Friar, “but this man, William of Ockham” (c 1287–1347).   As you may remember, he was the theologian and philosopher famous for expounding a principle known as Ockham’s Razor.  All things being equal, Ockham contended, the simplest solution is the best.  I learned about the Razor in college and it’s remained with me since.  In my work, it’s not much of a leap to infer that less is more. 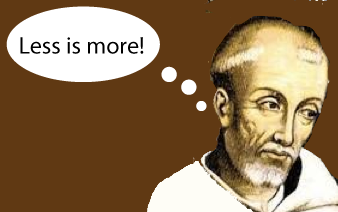 Alas apparently no one in the Democratic Party and its various expressions has ever encountered Ockham’s Razor or the inference.  That’s really too bad. Last workweek was foreshortened by Labor Day.  Even so, forty-one emails found their way to my inbox soliciting contributions for the coming election.  Yes, you read that right: 41.  The prior week which closed out the month of August was undoubtedly higher, probably significantly so, but I didn’t bother to keep count.  Keep count — forget it.  Because I find both the volume and content a turn-off, my strategy is simply click and delete.  How could you, one might ask?  Don’t you feel singled out and flattered by those “dear Jonathan” messages from Joe (Biden), Harry (Reid), Bill (you know who) and even Barack?  Not so much.  I know robomail when I see it.  How about a chance to dine with the President, or “visit DC for free”?  Well, perhaps the odds are not as slim as winning the Mega Millions, but they remain strongly against me breaking bread.  Don’t get me wrong; I’d love to see Obama in an intimate setting, have a chance to chat.

Beginning with 2008, Democrats have prided themselves on being ahead of the political digital curve.  It gave Obama an edge both then and probably in 2012.  Among the tools in their kit was having and using millions of email addresses.  And the first time around, it seems to have worked for them.  These days, I’m reminded of an interview with a 1%’er who had just built his sixth luxurious house.  He was asked why — obviously he didn’t lack for shelter — to which he replied, “Because I can”.  Technology is a great equalizer; it potentially makes us all information billionaires.  The Internet is truly an open highway — creating and sending an email is both free and easy.  In that regard, we’re very much like that 1%‘er.  Why do they send all those emails — because they can!  How lame is that?  Don’t these supposedly smart people at the DNC and other campaign headquarters know that less is more?  Don’t they understand that a message to oft-repeated ceases to be special, ceases to demand any attention or, yes, respect?  Apparently, not.

And then there is the other side of the turn-off: the content.  It’s become a truism of the digital world that content is king.  We’ve all heard someone described as “an empty suit” and we know what it means.  Not much there, there.  If “empty mail” is content’s political king, then we’re all in trouble — not much there, there.   Certainly not of any substance that would make me want to read on, much less convince me that what’s being put forward is of any worth.  When I say, less is more, it’s not meant to constrain content.  Sure I’d go for the sparse compact language of Hemingway over the density of Faulkner, but let’s have some meat on those bones.  And let's have it more selectively — less is more.

Don’t ask me to support Democrats to keep the brothers Koch a bay.  Don’t continually insult my intelligence.  Treat me like a serious person living in a very complex and perplexing world and talk to me about substantive issues.  Don’t give me a bunch of Huffpost misleading hyperbolic headlines. “We’ve won August”, and here I stupidly thought the election is in November.   “I’m thrilled for you Jonathan”, oh, do you know something I don’t?  “Look’n pretty good”, of course only if you contribute x dollars.  “What do you think”, cast your vote for a car magnet — beg your pardon.  “Add your name – refuse to be cynical.”   Well you get the point.  Over and over many times a day, more when some reporting deadline draws near an unending series of vapid messages.  Click, delete.

It’s depressing to see how dysfunctional our government has become.  No wonder many Americans have lost their confidence in a once wildly popular president and far more so in congress.   But what’s really depressing is how shallow and myopic the people for whom I generally vote  have become.  Content isn’t king in the land, politics and political expediency is.  It’s disheartening and very disappointing to learn that the president is putting off action on immigration, something so desperately needed.  Let's not to offend potential voters in “red” states before the election.  Right.  It probably won’t help, but that’s another story.

So why don’t I simply hit the unsubscribe button?  Now that is an excellent question, one I often ask myself.   For sure something inside doesn’t want me to lose touch with “my” party, doesn’t want me to signal a lack of support.  But perhaps more important, I’m hoping for something better.  That, alas, is unlikely to happen.
Posted by Jonathan J. Prinz at 3:22 PM