Tomorrow it will be all over and, regardless of where we stand, most of us will breathe a big and audible sigh of relief.  Yes!  No more emails straining the capacity of our inboxes, phone solicitations and robocalls demanding our attention or all those mostly vapid or nasty commercials.  We are suffering collective election fatigue.  No other democracy has this kind of endless quadrennial campaign season.  Quite the contrary, in many places campaigns are restricted to just weeks.  And if what happens when we elect a president were not enough, there are those midterms which put legislators in permanent campaign mode.  It’s hard to believe that’s what the Founders had in mind — responsive to the voters is one thing, programmed paralysis is quite another.

I cast my ballot early here in North Carolina along with perhaps 2.7 million other citizens.  Only California and Texas, among the 32 states (plus the District of Columbia) that now have early voting, can boast larger numbers.  It is expected that 35% of us will already have voted on election day, up from 30% four years ago.  That percentage is likely to be higher in the years ahead.  Much of early voting can be attributed to the growing number of states that have adopted it and to the increasingly well-organized groundwork done by the campaigns.  But it seems to me that many citizens simply wanted to put the election behind them.  Let’s remember the vast majority of us had made our choice even before August conventions. 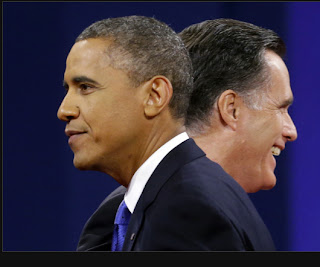 The stakes in this election are high and, as many have pointed out, the philosophical divide in sharper relief than has been the case in years past.  Interestingly the core issue — the size and role of the federal government — has been with us since the earliest days of the Republic.  It was litigated by Jefferson and Hamilton just as hotly as it is today by Obama and Romney.  It is unlikely to be resolved on November 6th and why that is the case is something we should all be contemplating in the days and months ahead.

Our elections are long and arduous, but they are largely devoid of seriousness or substance.  To be sure, we have a good generalized sense of where the two parties stand on the size and scope issue, but we have been exposed to nothing close to an adult conversation on that or, for that matter, any other subject.  Campaigns are mired in hyperbolic grandstanding and sloganeering, driven by well-tested words, phrases and manufactured sound bytes.  Candidates don’t hope that we will understand the issues but that we will latch on to a purposefully slanted, and often misleading, catch phrase or loaded words.  In today’s world, we don’t define candidates by the content of what they say but by the characterization by which they have been defined by others.

The press and especially the pundits, though it is often impossible to distinguish the two, complain loudly about a lack of specificity and substance in these campaigns.  They should feel ashamed in doing so.  In large measure the tone and substance (or more accurately lack of it) is driven by the media’s often self-serving coverage.  Their job, it would seem is not to inform, but to build ratings and sell their wares, whatever that may be.  We have a 24/7 news cycle, but all that time is taken up with shockingly little content.  A story of note, or often of attention getting potential, presents itself and then is repeated ad nauseam.  What’s remarkable is not how much content, how many stories, can be covered in this extended programing time but how few really are.  It sometime seems that only a single thing in a single place is happening at any given time.  It’s the story of the day or the week, covered by all the lemmings wall to wall.  The singular storyline, once established, is hammered home.  Accorded the gravitas of that must-know piece of news, it is packaged in usually single-dimensional form and then relentlessly repeated and milked for all its worth.  That a handful of giant and powerful companies control our media contributes heavily to the problem, but that is a discussion for another day.  The point here is; how can we expect a serious conversation in this highly manufactured environment?  Of course, it’s impossible.

Again, the core issue we face revolves around the size and role of the federal government.  That alone tells us a lot about what kind of conversation is required if we are ever to approach some resolution.  “Size” and “role” are short four-letter words, but in this context words of immense possibilities and complexities.  Seriously addressing them doesn’t involve deciding between black and white but, to borrow from this year’s book rage, at least fifty shades of grey.  You and I feel strongly about where we stand or delude ourselves into thinking that the specifics involved are easily defined.  If we’re really honest about it, each piece of the puzzle requires some degree of nuance.  Nuance is just the kind of thing we, and of course politicians and news people, like to avoid.   Nonetheless, first admitting to the nuance and then incorporating it into the discussion is precisely what we require if our fundamental problems are to be addressed.

The presidential candidates didn’t have a substantive conversation about the issues because you and I are not really discussing them either.  More troubling is that both they and we are so dug into our positions, so immobilized by them, that it’s hard to look at any of the issues with even the smallest degree of objectivity.  Those of us who believe in a fairly robust role for the federal government haven’t successfully articulated the limits — are unwilling to do so.  We are equally loath to admit where government performs poorly or inappropriately certainly not to consider specifically what we can and cannot afford.  Conversely those who want less government are equally fixed on a simplistic position.   They think states and private enterprise separately or in combination can do it all.  Just as we haven’t articulated what government shouldn’t do, they fail to spell out what it should.  They are against federal government involvement except of course on the day their house is overwhelmed by a Sandy.  Likewise, we advocate for a substantial activist government but not in our bedroom or monitoring our phones.

I believe Barack Obama will prevail on Election Day.  Less certain is the composition of the House and Senate but neither body is likely to be given a clear direction or mandate.  As important as this election may be, it won’t be decisive in resolving our fundamental issues.  It’s unlikely to move people to the table for a real discussion of the challenges that lie ahead or to come anywhere close to resolving the size and role issue.  We still haven’t recovered from the disasters, economic and natural, and won’t for some time to come.  So it’s hard to be very optimistic about the day after regardless of who wins the presidency.  I do think most Americans are tired of stalemate and the bickering that is both its cause and byproduct.  Perhaps that does suggest some light at the end of the tunnel, but first we have to pump out the floodwaters.

_____________________
I call them Transcenders.  To brand them nonbelievers is to assume religion and its particular belief system the human default.  Worse it suggests that those who have left religion behind lack beliefs.  Nothing could be further from the truth.  For more read my book.
Posted by Jonathan J. Prinz at 1:47 PM No comments: