Two seasons ago, Netflix allowed us to watch its entire House of Cards season, immediately and at will.  I know some people who engaged in uninterrupted binge viewing. Well, sometime mid-summer I heard an NPR piece about the tenth anniversary edition of Jacqueline Winspear’s 2003 best selling novel, Maisie Dobbs. The retrospective review was so intriguing that I immediately hit Amazon’s One-Click and minutes later started reading on my iPad.  I was hooked.  Forget the clever aunt Jane Marple or that pompous Belgian who walks like an overdressed penguin, Maisie Dobbs wins my vote.  I couldn’t put it down and, discovering that it was the first in a series of ten (more to come), I decided to read them all.  Given a life beyond Maisie Dobbs, my binge reading took a few weeks ending this past Saturday with number ten, Leaving Everything Most Loved.  You know a book is good when you don’t want it to end, and that happened to me ten times in a row. 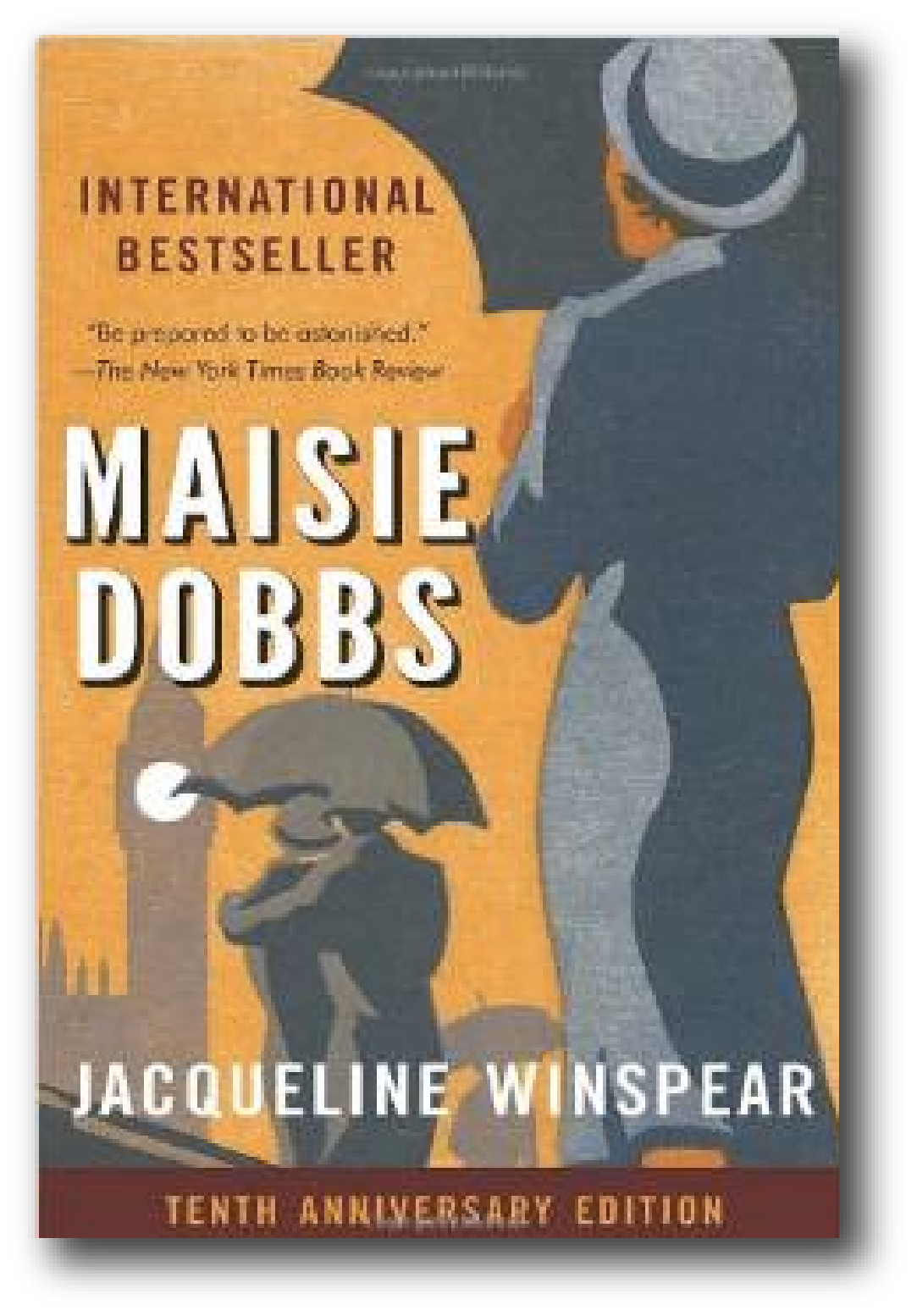 Jacqueline Winspear is an engaging mystery writer, but what makes the Maisie Dobbs series so compelling is that, beyond telling a good story, she knows how to build characters.  I stayed with Maisie because I got to know her and to really care for and about her.   Maisie’s personal saga is, as are those of the “supporting cast”, captivating, but I won’t ruin it for you.  Save to say, she’s a great feminist character, a person of both soul and accomplishment; a professional woman from humble beginnings years ahead of her era’s time.  In part her accomplishments come from her own drive and superior smarts.  But she was also helped greatly by being at the right place early on and ultimately benefiting from the aftermath of war.  The stories are set between the two great twentieth century world wars when, because of the first, English men were in very short supply.  That limited women’s marriage options but also presented them with some unique opportunities.

The Maisie Dobbs saga plays out during the same period as PBS’s wildly successful Downton Abbey.  They share some things in common, not the least being set against the background of upstairs/downstairs dynamics.  The significant difference is that the Compton family, Maisie’s early patrons and eventual friends, are far more enlightened and embracing of modernity than Robert Crawley’s tradition bound Grantham aristocrats.  This of course is England where class matters and where self-pride is expressed at every level and place.  But the overriding theme that keeps on raising its head, especially in Winspear’s work, is World War I — the Great War — writ large.  It was a conflict that the British, perhaps more than others, experienced right up close and, with conscription that was universal.  Every family was somehow touched, and especially Miss Dobbs and those near and dear — patrons, friends, clients, and employees.  The lost limbs, impaired lungs, scars and what at the time was called shellshock loom over each of the 10 books.  So, too, does class, especially the disparity between the good fortunes of the rich or affluent and often the misfortunes of most everyone else.  Sound familiar?

Maisie Dobbs is a period piece, but the issues it confronts, or perhaps merely the state of things it exposes, are still present in our own time.  First and foremost, we’re reminded about the futility of war and especially of its often catastrophic consequences for both those who fought and those who either lost loved ones or who watched them return, a shadow of their earlier selves; physically, mentally or both.  Maisie’s best friend lost all her siblings and is married to a man who came home mind in tact but disabled.  Her assistant has gas damaged lungs that don’t bode well for a long healthy life.  Even Maisie, a volunteer triage nurse, was wounded and is challenged by a breakdown.  These stories could be told of those touched by the fighting in Afghanistan and Iraq, by multiple deployments that weakened both body and psyche.  Veterans of combat or those families touched by the horrors of the war no longer feel themselves fully whole.

World War II seems to have touched Americans more directly, in part because conscription forced it upon every segment of the population, but also because its fighting men have been romanticized as “The Greatest Generation”.  Viet Nam had conscription but, unlike the battles against Germany and Japan, was considered a senseless and then thankless conflict.  It was swept under the virtual rug of our national consciousness.  We’ve learned not to do that anymore — even when we oppose the conflict — and in some way have become much more acutely aware to war’s cost.  We are especially sensitive to shellshock, rebranded, PTSD.  We’re aware, but unlike what England experienced in Maisie Dobbs’ day, our recent fighting engaged only a tiny fraction of the population.  Most of us have remained personally untouched.

The Great War largely defined Maisie Dobbs’ world.  Is that an over simplification of England at the time?  Perhaps, but these are novels.  Nonetheless, it raises the question if every generation and indeed people is defined by its wars and the degree to which they have an impact.  At the very least, we seem to use wars as generational signposts.  War is horrendous but it plays and outsized role in our lives and often our identity.   The wars we fight, or chose to forgo, says something about who we are at any given time and of course within the flow of history.  In the twenty-first century we certainly are dominated or at least haunted by the presence of conflict and unwittingly forced to decide whether or not to join this or that battle.  It's a painful choice.  Perhaps that has always been true, always been a fundamental of the human condition.  The story of a Maisie Dobbs brings it to an individual human level.  It's what makes the a simple mystery tale so powerful.

Another part of Maisie Dobbs’ story is the Depression that devastated England much as it did Europe and the United States.  Thanks to vivid contemporaneous photography, the images of desolate Depression bread lines are fixed in our minds.  We think suicides of broken men and many more who lost both their jobs and their homes.  Jacqueline Winspear reminds us that, even in times like that, many among the affluent were essentially untouched.  Their lives went on as usual, spending on fashionable clothes, motorcars, parties and exclusive schools for their young.  The London social calendar is uninterrupted and weekends are happily spent in the country, a place where homes were if anything more resplendent.  Butlers still open doors, cooks prepare meals, and maids keep the place spic and span.  All this when the vast majority are just trying to keep their heads above water, many with little or no success.  It’s a story we all know too well — the 1% and everyone else.  Some things just don’t change.

It is often said that history repeats itself, something many scholars consider nonsense.  Yes, we’re human and we do repeat the ways of our parents, but not precisely.  When I read of the multimillion dollar price tags on apartments in New York’s luxury buildings — or a million dollar parking space — and contrast that with how unaffordable our cities have become, the story of Maisie’s world rings disturbingly true.  It may be comforting to know that what’s happening now is nothing new, but it’s also deeply depressing.  Is this what we call progress?  That we can survive and move forward as Maisie Dobbs did reaffirms the endurance of the human spirit.  Perhaps we can’t change the fundamentals, the repugnant disparities, but we can avoid letting them paralyze us or lose our will to move forward.
Posted by Jonathan J. Prinz at 11:51 AM