Of course AIPAC is a Jewish lobby.  If it were an Israeli lobby it would surely have to be registered as a foreign agent under FARA.   It is not.   AIPAC's counterpart — yes there is an alternative point of view on supporting Israel — is called J Street not "I Street".   Listening to Chuck Hagel's critics one would think that calling a group "Jewish" is a pejorative.  Perhaps that's how this particular group of right wing senators sees it, but it's a gross misreading.  Jews carry the designation with pride.  In the United States it's possible to have a Jewish lobby, just as it is a civil rights lobby, a LGBT lobby, a business lobby, or yes a gun lobby.  That's a good thing. 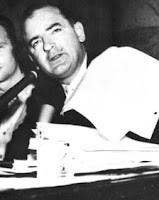 Listening to Hagel's confirmation hearing, certainly his questioning by Republicans, one might have thought that support for Israel was the principal job of a US Defense Secretary.  Leaving aside that the kind of support envisioned by these interrogators had a neo-Con, and in some cases an evangelical tilt, as an American Jew I found it perplexing.  But that was really an aside because the tone of the hearing had the unmistakable echo of ones conducted by the late Senator Joseph McCarthy.  The "Jewish lobby" and support of Israel came off as convenient rhetorical tools in carrying out their clearly coordinated agenda.  And the tone of the questions, perhaps none more than those posed by John McCain — just answer yes or no — brought me back to the 1950s.

It seems that Republicans have decided that McCarthy like smearing of a candidate is the way to go.  They started with Susan Rice, whose appointment as Secretary of State was still born thanks to this kind of guilt by association.  She had no role in, or responsibility for, the ben Ghazi tragedy.   They held back on John Kerry (the onetime victim of swift boating) probably because they saw his senate seat as a potential win-back.  And Hagel is being tarred not for his views on Israel which are probably shared by many in the Jewish community, but because they view him as an apostate.   Independent thinkers are the last thing that today's Republicans want or will tolerate.  Expect the Hagel confirmation votes in committee and on the floor to be strictly along party lines. 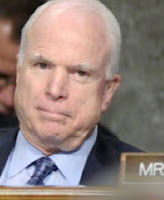 McCain of course has very personal reasons to dislike Chuck Hagel.  A strong supporter of America's ill conceived war in Iraq, the Arizona senator felt betrayed when Hagel opposed the surge and turned against the conflict.  Worse was when, now out of office, he supported Obama in 2008.  McCain's opposition has nothing to do with Hagel's qualifications for Defense; it is purely political and mostly very personal.  It is yet another reason to be thankful than this angry old man never reached the White House.

What the Republicans robbed us of with their McCarthy-like questioning was any substantive discussion of Defense's role or what its priorities should be in the years ahead.   I don't mean that the hearing totally ignored its underlying purpose, but that substance was drowned out by the noise of distraction.  Oh, would old Joe have been proud.  Oh, should McCain and company be ashamed.
Posted by Jonathan J. Prinz at 10:35 AM