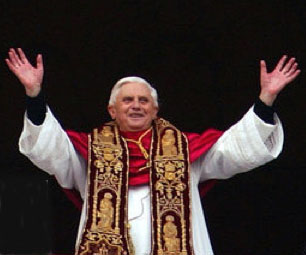 When something hasn't happened in nearly 600 years, and also only four times throughout history, it's very big news.  Not surprisingly the unexpected abdication of Pope Benedict XVI scheduled for month's end has been accorded headline coverage worldwide.  Of course, not being a Catholic, I look at the events in Rome with some distance, though not without great interest.  Funny thing is that one of my first thoughts was not so much about what the princes who surround Benedict were thinking but what thought may have come into England's Prince Charles's mind.   Here is a pope at 85 throwing in the towel after only eight years in office and doing so because of advanced age.  In contrast, just a few days earlier Queen Elizabeth, age 86, celebrated the 60th anniversary of her ascent to the throne of St. James.  My suggestion, Crown Prince in waiting, don't hold your breath.  As to the princes of the Church, well it's open season again — another conclave, another shot at the big prize.

The vote that takes place in Rome will hardly be a democratic free for all.  To start, while there are more than one billion Catholics worldwide, only 118 men, all of whom have been appointed by Benedict and his predecessor, will have a say in the matter.  They will not be of the people, but by the monarch. To be sure there will be politics at play when the elector Cardinals gather, but it is a kind of contained politics more akin to say the Chinese Politburo than what we know as citizens in a democracy.  Like in China, this is a one party system and a buddy system at that.  What's different of course is that while a Chinese party head leads a collective and must answer to his colleagues, popes are absolute and infallible rulers.  They answer only to God.  How exactly that works, I don't really know, but let's take it at face value. 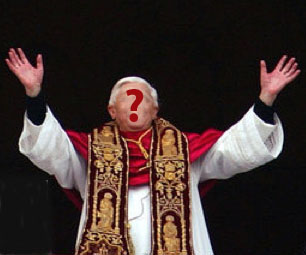 Just as Prince Charles shouldn't hold his breath waiting for his beloved Mum to step aside, we — non-Catholics and Catholics — shouldn't expect a major departure from current Vatican policy.  Such departures haven't happened often, John XIII being the notable exception, and with good reason.   While there is a backbench from which to select potential princes of the Church, popes tend to elevate from a pool of the like-minded and that has been especially true with the men who put all the current College of Cardinals in place. Their appointees are decidedly conservative men who, if Benedict is any indication, see themselves as protectors of long established tradition (the past) rather than shepherds of the future.  Benedict has no tolerance for "cafeteria religion" or reforms.   The new pontiff, replacing one who says he's too old and tired to move forward, is likely to be a study in stylistic rather than substantive change.  Remember, these are a group of men who have largely rejected even the slim light let into their window by Vatican II, which many of them have actively sought to subvert.

Not only is Benedict's successor unlikely to turn the corner on an all male clergy, birth control, gays or stem cell research, I'd guess that a younger more vigorous Bishop of Rome might be all the more assertive about holding the line.  At a time when large numbers of Catholics have left the Church, especially in Western countries, modern day popes and their appointed princes seem to be turning their backs on any kind of dissent.  To be sure there are large numbers of loyal rank and file Catholics who would welcome change, who yearn for it, but they have no say in the matter.  The Church is an autocracy, the Pope its absolute monarch.

There has already been substantial comment and analysis accompanying Benedict's decision.  John Patrick Shanley, author of the powerful play Doubt, penned an op-ed entitled, Farewell to an Uninspiring Pope.  I think "good riddance" better expresses his views.  What struck me about the Times' opinion pieces was how many of its star columnists were brought up in the Church, products of parochial education, and to varying degrees have left it and probably religion behind.  I don't want to extrapolate here and suggest that, of course, well-educated and sophisticated writers could never hold on to the Roman Church's conservative teachings.  Yes both Bill Keller and Frank Bruni who wrote pieces might well be defined as "lapsed" but Ross Douthat most certainly can't be put in that camp.

Douthat is the paper's most authentic conservative — David Brooks is less consistent — and a still young man who always writes with enormous intelligence.  I usually disagree with him, but am always stimulated by and benefit from the read.  It is Douthat's attachment to Church and its teachings that made his thoughts on the abdication more interesting than any of the others.  In his blog entitled, The Pope Abdicates, Douthat speaks of the short-term generosity of Benedict's decision.  He sees this in the context of the fact that,
“globetrotting face of Catholicism” and “media-savvy C.E.O. of a controversial brand” have been added to the theological and administrative obligations inherent in the office, the burdens of age are arguably more of an impediment to papal effectiveness than ever before, and the mix of stasis and confusion created by a pontiff’s slow decline can have more immediately disastrous effects than they might have had in an era when papal incapacity could be a Roman secret rather than a global spectacle.

Carol Williams in a LA Times piece also speaks of the Pope's "generous act", one that she suggests could transform the Vatican.  Echoing Douthat and others she writes, "A pope today runs a massive, global operation, not unlike a multinational corporation. He is expected to travel to the faith’s far-flung congregations and craft important doctrinal policy and teachings."  She suggests that this move might herald a fundamental change in how the Church operates.  It may open the way for future papal abdications, perhaps even the consideration of mandatory retirelment at 75 much like that of Cardinals.  It is just such thinking that troubles Ross Douthat and which is the bottom line of his blog.  In his view the benefits of the current pope's retirement:
...need to be balanced against the longer term difficulties that this precedent creates for the papacy’s role within the church. There is great symbolic significance in the fact that popes die rather than resign: It’s a reminder that the pontiff is supposed to be a spiritual father more than a chief executive (presidents leave office, but your parents are your parents till they die), a sign of absolute papal surrender to the divine will (after all, if God wants a new pope, He’ll get one), and a illustration of the theological point that the church is still supposed to be the church even when its human leadership isn’t at fighting trim, whether physically or intellectually or (for that matter) morally.

Williams points to the logical implications of the Pope's abdication, of its potential for leading the Church into the twenty-first century world.  Douthat speaks of its danger, but more important reflects the dilemma facing religious leaders in our time in and out of the Roman Church.  Like many of the faithful, he has been pointedly critical of the contemporary Church's shortcomings but his underlying view is in sync with its leadership.  However logical change may be, it is threatening to what followers have been taught to consider an eternal faith.  The problem is that much of what has been considered eternal is being challenged by what we now know.  Part of that knowledge is that far from being infallible, popes and other church leaders are mere mortals whose vision is as limited as our own.  They may talk of protecting tradition, but so often and so transparently they are protecting their own interests.  Being among the chosen 118 or ultimately being declared the infallible absolute monarch is, Benedict's move notwithstanding, hard to give up.

Much attention will be paid to the selection of a new pope in the weeks to come.  The drama associated with a conclave, the anticipated white smoke and the pomp, not to mention the theatrics, of the ceremonials are alluring.  We have the same fascination with the British monarchy and for some of the same reasons.  But theater, which is exactly what it has become for a growing number of us including those brought up as Catholics, has its limits.  Church leaders across many faiths are so often talking to themselves, exactly when one would hope they are talking to us, reflecting who we are rather than the vested interests they might have.  Ross Douthat is right.  There is danger in Benedict's generosity, but the implications of that danger have long since passed.  Recognized or not, we are in a different place and changing that will ultimately prove more challenging than preserving the past.
_____________________
My book Transcenders: Living beyond religion and the religion wars is now available in print and as an eBook.  Both versions are available at Amazon; the electronic iBooks version can be found at iTunes; a Nook version at Barnes & Noble.
Posted by Jonathan J. Prinz at 10:47 AM