Time to bid another farewell but not a goodbye to the Grantham’s and Downton. They'll be back for yet another season.  When season three began, 7.9 million viewers tuned in, a record for PBS.  The Brits have delivered for us again.  Of course, its pedigree and prestigious American address notwithstanding, Downton Abbey is a classic soap opera.  There are definitely times when one thinks, "Can’t believe I'm watching this".  And of course Downton is not only a soap opera but a derivative one at that.  Each episode builds on the tone and themes, if not storyline, established in BBC's 1970s Upstairs Downstairs, also shown here on PBS.  That saga's smaller but also grand 165 Eaton Place has been "reopened" with new owners in an updated version — 9 new episodes so far — clearly aimed to piggyback on its emulator's success.  It's all rather incestuous, wouldn't you say? 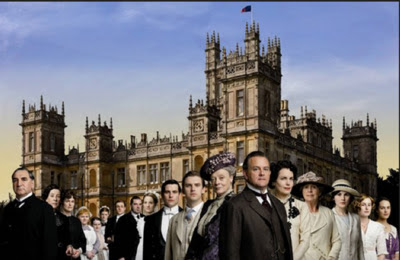 What is it exactly that has gotten so many of us hooked on the Grantham family and their cohabiting servants?  For one, the story is well spun; for another it is very well acted.  Yes the residents of Downton live in a vastly different world than our own, but ultimately these are human beings with aspirations and characteristics that transcend any given time, place or class.  Moreover, we're watching a series that has sufficient airtime to allow for character development and, not inconsequentially, neither our train of thought nor theirs is interrupted by commercial messages.  Ah the joys of public TV.  If you're not sending in your yearly support, shame on you.  The absence of commercial interruption is equally appreciated by viewers of HBO created series and most recently of Netflix's excellent House of Cards.

The Downton characters are developing and we, as is the case in any well-told story, are both engrossed and invested in them.  We're rooting for the still unfulfilled hopes evident both upstairs and down.  We could not help but be moved by the untimely loss of Sybil, in many ways the most courageous and interesting of the Grantham sisters.  We wait with bated breath to see the impact next time around of what's happened to Mathew, Downton's great young hope.  And while alas few of us have a figure like Dame Maggie Smith in our own families, we so wish we had one of her ilk around if only to observe the show of it.

Okay, Downton is good TV, but again what makes it so compelling?  For me the real pull of the show is the underlying theme that runs through, the fundamental question that is both timely and timeless.  Right there on display is the tension filled struggle between past and future.  It is a struggle that makes at times for a very awkward present.  It rings so true because we both know and live it.  Issues of class play at Downton much as they do in our own day.  But let's not be simplistic about it.  Holding on to yesterday, then and now, is something found across the economic strata.  Clearly, the tug of war within the Grantham' family has its mirror image in Carson's realm and in both cases it is mostly generational.  That said, age and generation is not always as decisive a factor as mindset — older people can be very progressive, young ultra-conservative.

Looking at our own social and political landscape, our Dear Abbey if you will, there may be no more fundamental issue at hand than past vs. future.  There is also nothing more ferocious than an aging animal (physically or mentally) faced with being supplanted by a vigorous forward thinking youth.  That's especially true when the pretender has a different look, background or way.  The Downton syndrome plays out before us today as people of waning power and yesterday's ideology face, for example, a president who doesn't look or talk like them.  Tomorrow-focused people may show respect, but tend not to accept what is or has been as a given.  They question and they ultimately demand change.  Lord Grantham is unnerved by both.  He sees the quality of his performance challenged and his hold on the reigns undermined.  Isn't that what all change is about and why is so resisted? Passing the baton is always painful, at the very least bittersweet.

It was only days ago that Pope Benedict announced, relative to the Church we know, his unprecedented abdication.  It sent shock waves around the world and only now are the Catholics and others beginning to focus on the ideological fallout.  Among the principal issues his move raises is the nature of the papacy itself, most especially the notion of infallibility.  Remember popes aren't merely absolute monarchs they are also seen as God's infallible representative here on earth.  It gives them truly extraordinary powers.  Leaving aside celibacy and the absence of family life in the traditional sense, there is a strong element of Downton in the Roman Church.  It is an archaic Downton bound by traditions of the past — in large measure still living in the past — with still vast but no longer totally secure resources.

To be sure Rome is being challenged by its immediate and still unresolved scandals, to be charitable moral lapses.  But the real issue they and, while differently, other traditional religious groups face is how to bridge what was with what must be if they are to sustain.  Their problem, and make no mistake equally ours, is how to let go and move on.  Easier said than done especially when so many, perhaps a huge majority, are mired in or, perhaps lest judgmentally, reverent of what for so long was.  When your arteries are clogging up with very tasty butter rich fare, it's hard to embrace a much altered diet.  Very tough but in the end your survival depends on it.

We all know Lord and Lady Grantham.  We know their children and perhaps mostly we know the world down below, the one with the greatest stake in change and moving forward.  Downton's world may still be in the early twentieth century but it translates fluidly in the twenty-first.  We're all living it at this moment.
_____________________
My book Transcenders: Living beyond religion and the religion wars is now available in print and as an eBook.  Both versions are available at Amazon; the electronic iBooks version can be found at iTunes; a Nook version at Barnes & Noble.
Posted by Jonathan J. Prinz at 11:18 AM