“I think it is maybe time -- what do you think -- for maybe a businessman. How about that?”  That’s what Clint Eastwood told the assembled in Tampa.  Ah, the solution to our problems, a businessman as president.  And of course Mitt Romney couldn’t agree more.  We heard the word business 17 times in his acceptance speech — his credentials in it, President Obama’s lack of them.  He pointed out that the President “…took office without the basic qualification that most Americans have and one that was essential to his task. He had almost no experience working in a business.” 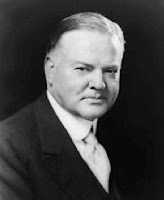 That’s an interesting qualifier for the presidency, one that apparently the American people have never put high on the list.  Indeed, looking at the backgrounds of our forty-four chief executives you will find numerous generals, professional politicians and lawyers.  We’ve had at least one academic and, yes, an actor.  But in the long list there were only two businessmen: Herbert Hoover and George W. Bush, the first and only MBA.  In addition to the many misty eyed memory lane moments, Romney’s speech focused on the economy, the importance of free enterprise and business.  Eastwood said it may be time for a businessman, Romney’s unmistakable rejoinder — I’m your guy.

The only problem is that the two businessmen presidents turned out to be disastrous for the economy.  Hoover presided over a depression that continues haunt us and Bush over the worst economic collapse since.  It was the non-businessman presidents who led us out of downturns —  clearly this one remains a challenge — and in robust periods of growth.  Franklin Roosevelt, the politician, Ronald Reagan, the actor, and Bill Clinton, the lawyer, certainly didn’t seem deficient because they lacked business experience.  And Clinton left us with a surplus compared with George Bush who, through a combination of tax cuts and two unfunded wars, ran up the lion’s share of the deficits for which the Romney-Ryan team  blames President Obama.

Yes, we surely need a business president, one with the background of Hoover and Bush.  That’s what the people in Tampa offered us.  And speaking of former presidents, Bill Clinton is slated to be the lead off featured speaker in Charlotte.  Did you notice the absence of former presidents in Tampa, except of course for the usual bow to Patron Saint Reagan, this time delivered in film and by those noted flame keepers, Newt and Callista.  Apparently the Romney people think dead chief executives are  a safe bet; live ones are better left at home and out of sight.

According to the US Census, African American and Latinos combined now represent an almost 30% of the population.  Did you see much evidence of that as the TV cameras panned out at those gathered in Tampa?  The GOP constituency, certainly those who make it to conventions, is White as Ivory soap, a group that has declined from 75.1% to 63.4% in just the last ten years — Latinos in contrast are up 33%.  Keep watch next week and you’ll see a much more representative audience in Charlotte.  This week’s crowd cheered loudly when Romney said, “As president, I will protect the sanctity of life. I will honor the institution of marriage.”  They still care deeply about socially conservative issues, but young Americans have a different take.  According to Pew Research, “…young people favor gay marriage by more than two-to-one (65% to 30%).”  And they join the majority of Americans across most age groups who favor women’s reproductive rights to one degree or another.  I don’t know what this year’s election will bring, not only for the presidency but most particularly for the House and Senate.  Near term, the demographics and out-of-sync views in Tampa may not be deciding factors, but long term a party that looks backward with a combination of nostalgia and anger for what is no more, is ill positioned for the real future.

They say there has been scant movement in voter preferences for months.  Most of us probably take in these conventions with minds already made up.  I plead guilty to that and will enthusiastically vote for Barack Obama and Joe Biden.  I’ll be sincerely relieved to see Romney-Ryan go down to defeat, euphoric if the election is not as close as predicted (we all can dream).  As to Clint Eastwood, politics aside, I’m still a big fan.  He is one of the great movie makers of our time and I sure hope he keeps on with his day job for years to come.

Transcenders: coming to a digital device near you next week.
Posted by Jonathan J. Prinz at 10:46 AM