My father joined the Blau-Weiss Zionist youth group in 1917.  The German Jewish Community and family in which he was reared were largely unsympathetic to the idea of Zionism.  They were an assimilated lot many of whom had prospered and felt secure in their Teutonic "homeland".  He was unconvinced that this security would endure and of course turned out to be a very prescient 15-year-old.  Our family didn't make  aliyah (going up to the land of our ancient ancestors), but landed in the United States.  In a sense, our life here continued that once happy integration of my German forbearers into the larger society.  Nonetheless, my liberal rabbi father never lost his attachment to the Zionist idea and counted many of Israel's founders including David Ben-Gurion and Golda Meir among his friends.  My parents attended the historic 1947 United Nations session that approved the partition of Palestine and, in doing so, facilitated Israel's founding only months later in 1948.  I was a youngster caught up in the excitement of that time.

For Jews around the world, including here in the United States, the founding of Israel was momentous.  After perpetually living as a minority, essentially making gains only at the sufferance of others, the notion that people like us could be Prime Ministers, Generals and Justices — masters of their own destiny — was at one unimaginable and exciting.  That was especially so for our family that had seen the rise of National Socialism up close, and for whom, like many other Jews, the Holocaust was not an abstract horror.  It was personal.  We watched Israel come into being, marveled at its barren desert being transformed into productive farmland, not to mention the creation of a real democracy where there had been none.  We were also alarmed by the multiple wars that threatened its existence. 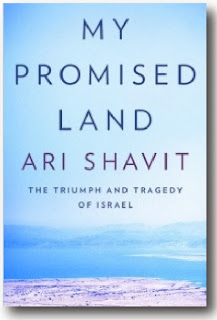 In recent years many of us have been perplexed and frankly often dismayed by Israel six decades on, particularly its seemingly unending occupation of the "Territories".  We ask ourselves, as do others ask, what is Israel in 2013?  A response to this question comes in the distinguished journalist Ari Shavit's recently published, My Promised Land: The Triumph and Tragedy of Israel.  It is a beautifully written and constructed book, a movingly personal statement brimming with information and insightful perspective on both Israel's past history and its immediate present.  What is Israel?  Well, it's complicated.

As anyone who regularly reads my posts knows, I am of the school that most things, personal and public, are complicated.  World and indeed national affairs are complex and don't lend themselves to or benefit from the often simplistic and glib analysis that we are given and then devour like sugar coated breakfast cereal or bitter pills.  It's easy to think you're getting your arms around what's assumed to be black and white when that's rarely the case.  So what we so confidently grasp as true is often an illusion.  In its pre-state early days, the time when Shavit's great-grandfather moved his affluent Jewish family from England, Palestine was settled by a relatively homogeneous group of pioneer immigrants.  They saw the land through idealistic but selective eyes.  What the family patriarch Herbert Bentwich beheld in 1897 was only the Zionist potential and future.  He averted his eyes from its then present — from the Arab villages, farms and population that in fact dominated the landscape.  It's complicated.

Bentwich came to Palestine by choice.  Britain has been good to him and his family bringing them wealth and a position in the larger community.  Like my father twenty years later in Germany, he was nonetheless uneasy about his people's prospects in the West.  He saw Theodor Herzl's vision and was determined to translate that dream into reality.  Of course the idealized picture Bentwich had in his head was remote from reality.  The small Jewish community that preceded and succeeded him would have to work hard to subdue the harsh land and ultimately could not avert its eyes from the presence of the neighbors whom they ultimately concluded stood in their way.  It would be a fight to survive.

Bentwich, my father and other early Zionists saw what others missed or refused to see.  European Jewry would still have some good years, but their worst fears (though not in England) came true and on a scale that even they never contemplated.  By the 1930s Zionism was no longer an option for many Jews, it was a necessity, one some tragically failed to see.  The next waves of Israeli immigration were not driven so much by that early idealism but by necessity and consequent displacement.  Many, especially the young, embraced their new home, its ways and language.  Some of their parents had a hard sometimes-impossible adjustment.  Interestingly, Shavit suggests, this was often more challenging for fathers than mothers.  The men had lost their hard earned place in society, their businesses or professions and thus their dignity.  They arrived dispirited, and sometimes remained so.  The women, with children to rear couldn't afford to succumb to depression and inertia.  They forced themselves to adjust and they acted — to move on.

Over the next decades leading to and beyond the founding of the State, waves followed waves of immigration.  They came not only from what was left of Central European Jewry but also from Arab countries — Orientals — and more recently from Russia — one million of them.  The early settlers were largely secular, non-religious.  Later ones included many Orthodox, some ultra-Orthodox.  The waves of immigration demonstrated that, unlike the assumed stereotype, all Jews are not alike.  Israel's gathering population was made up of a broad array of languages, cultures and colors.  Those who came first, or at least before the latest wave shared the same suspicions of the new, the same often-racial prejudices found in other places.  Israelis aimed to be normal, though Shavit consistently points to their extraordinary character, and suffered or benefited from all that goes with normalcy.

What we are reminded of throughout this insightful book is that for all its growth and accomplishments — what some have aptly called the miracle of Israel — this is a nation totally out of sync with its immediate surroundings.  Despite its diversified population, it is seen as Anglo-European misplaced in a naturally Eastern habitat.  Israel's population has grown dramatically but remains numerically a tiny spec encircled by a mammoth populous and hostile neighborhood.  Israelis see themselves as coming home after two thousand years of forced exile.  Palestinians see Israelis as having appropriated their home, one that they have occupied continually for centuries in the immediate past.  The larger Muslim world sees them as infidels that have taken hold of their holy ground.  The non-religious Jews see themselves as rightful proprietors of land they have tamed, creators of a productive society that never would have been absent their arrival, ingenuity and very hard work.  Like the Muslims, Israel's religious, especially the Haredim (ultra-orthodox), feel equally as strongly about infidels threatening their holy place, only in reverse.  It's complicated.

Israel's economy has been booming.  Its population has mushroomed through a combination of immigration and higher birth rates than other developed countries.  It's education system coupled with the arrival of the well educated from places like Russia has made it the hub of innovation, much of it, though not exclusively, in high tech and pharma.  At the same time, a large swath of its citizenry, the ultra religious, don't work nor do they serve in the military, something that is compulsory for all others.  It is an increasing sore point, an increasing economic and social drain.  Out of necessity, Israel has built the region's most powerful military, but the peace it hoped to attain remains elusive and worse, any prospect of it seems to be slipping away.  The occupation plays an important role here, but Shavit contends is neither the whole story nor would ending it be a silver bullet.  Whether Iran represents an existential threat (and Shavit thinks it does) may be debatable, but that the country faces a larger existential threat is not.  No threat is greater than what he calls "the elephant in the room", a demographic shift within that will make the Arab Palestinian minority the majority.  We're not talking here about the distant future, but about tomorrow morning.  Absent a two state solution, which is becoming more unlikely with every passing day, it is a rebalancing that truly will be complicated.

Some of Israel's young, to whom Shavit devotes an entire chapter, have decided to live life to the fullest.  They work hard, but at day's or week's end they party to the extreme.  Music, dancing, drugs and free sex abound to a degree that one has the sense that they, like the long dead Bentwich, have chosen to avert their eyes.  Perhaps that is the only way to maintain their sanity.  Perhaps they also are forced in that direction because those in charge just aren't delivering or solving the existential problem.  Israel has a totally dysfunctional government — sound familiar.

If you think you understand Israel you may be mistaken.  Many of us see it in a single dimension, simple not complicated.  Even if you have a greater sense of its history and even of its present, as do I, you will come off the pages of My Promised Land with a new and much more nuanced understanding.  It's complicated.  Reading through will be like the story of Israel itself, an experience of ups and downs; of promise and to some degree, despair.  Triumph and tragedy modifies promised in his title, and appropriately so.  The odds of ultimate success here are tough, not merely for Israel but also for the world as we know it and like it.  Shavit is sober.  He has enormous love and admiration for the country his family has called home for generations.  He is also critical — he knows and can feel the warts and all.  But he remains resolute.  This is home; he must have hope.  Regardless of what may lie ahead he's all in, committed to both the dream of his great-grandfather and the reality of his present life and time.  His words will inform, disturb and inspire — they will also touch.  They do so more effectively and better than anything else I've read on this subject of late.

___________________
My book Transcenders: Living beyond religion and the religion wars is available in print and as an eBook.  Both versions are available at Amazon; the electronic iBooks version can be found at iTunes; a Nook version at Barnes & Noble.
Posted by Jonathan J. Prinz at 8:54 AM