A few random thoughts as we look to the first debate of the presidential campaign.

There is a huge difference between being the president and seeking the presidency.  Nowhere was that more evident than in Barack Obama’s twin speeches at the United Nations and then at the Clinton Initiative and in Mitt Romney’s at the latter.  Presidents have deal with the realities of governance and their words have consequence.  That isn’t a partisan thing. W the candidate, and George W. Bush the president were two different things.  Candidates can engage in, if you will, free speech — presidents not so much.  Romney can criticize Obama for not being more aggressive in Syria or not meeting with Bibi in New York.  The president has to enunciate policy in a fragile and changing environment. 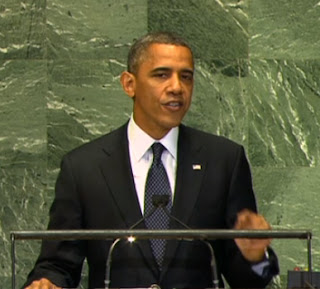 That was evident in his UN Address devoted mostly to the aftermath of the Arab Spring.  He bookended his talk with the story of Chris Stevens, the fallen diplomat who both supported the people’s uprising in Libya and fell victim to what appears to have been an extremist pushback in that country.  Just as Obama has been trying to put back the pieces of our damaged economy, his speech in many ways can be seen as attempting to correct a long course in which the United States has been on the wrong side of democracy, supporting a series of authoritarian governments in the Middle East.  Much of that can be attributed to our insatiable thirst for (cheap) oil, but we shouldn’t underestimate a desire for predictable and friendly regimes.  The president struck a strong balance between support for the Spring and reminding his listeners that free expression is among democracies essentials. That violence can't be tolerated.

At the Clinton gathering the contrast between the two men, not to mention equally their current roles, came into even sharper relief.  Obama set politics aside in delivering an impassioned address on human trafficking equating it to slavery.  Romney on the other hand used his time for what amounted to a campaign speech whose underlying message was that free enterprise was the solution to, yes, just about everything.  That may be a somewhat exaggerated assessment, but not by much.

The basic thrust of the Republican campaign this year is that there should be less government and a greater reliance on free enterprise.  It’s not a new theme and I think it’s helpful in spelling out the contrast between the two parties, their approaches and worldviews.  In all of this, Governor Romney’s singular and much touted credential is as a businessman, who assumably knows how to get the trains running and, most importantly, people back to work.  The problem here is that we Americans tend to be lose with words and imprecise about what they mean.  Businessman is a very broad brush designation much like the title doctor that can be applied equally to a physician and a philosopher.  So there are businessmen and there are businessmen.

When applied to Mitt Romney businessman does not equate to Henry Ford, Sam Walton or Bill Gates.  These were people who created and ran large companies with concrete products or services generating millions of jobs.  When I think of Mitt Romney as businessman, it would be more accurate to think Gordon Gekko.  Again that characterization may strike you as unfair even hyperbolic, but is it?  The fictional character who was fond of saying, greed is good, may not exactly match the likes of Bain Capital, but look at the story portrayed in Oliver Stone’s film Wall Street and you’ll see a reflection of the private equity business.  These enterprises are dedicated to making a profit for themselves and their investors usually by applying some form of financial reengineering.  I don’t think any of them claim to be job generators or even business managers.  Sometimes what they do results in bringing health to troubled enterprises, but not always as the story of both Bain and Stone’s fictional yarn suggest.

Elections often have as much to do with myth as with reality.  You might fairly say that 2008 rested on the myth (even though it was not promised) that a vote cast could bring about instant change to a troubled country.  Would that it could be so simple.  This year one candidate would have us believe the myth that his business experience is the answer to all our problems.  But let’s remember that Gekko is not Ford, Walton or Gates.  With that in mind, I’d suggest Romney the businessman doesn’t bode well for the country.

Now, on to the debates.

I call them Transcenders.  To brand them nonbelievers is to assume religion and its particular belief system the human default.  Worse it suggests that those who have left religion behind lack beliefs.  Nothing could be further from the truth.  For more read my book.